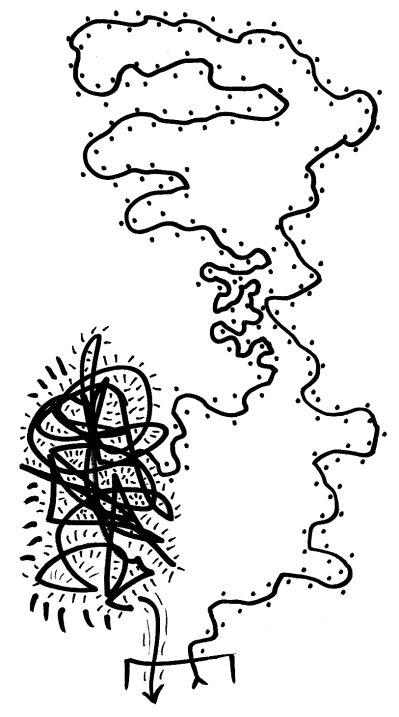 But one day, things changed. Their maid, Maria, arrived in the morning at her regular time to clean their condo. After waxing the black-and-white tile dining room floor, dusting the glass shelves and tabletops, rearranging cushions on the couch, love seat, and side chairs, vacuuming their brilliant white pile carpets, polishing their heavy, ornate silverware, and washing windows, she headed into the bedroom. She collected stray piles of dirty clothes to launder or dry-clean, rearranged scattered items on the dressers, and turned to the bed to straighten it.

But when she pulled down the covers, between the black satin sheets, she found the rotting corpse of an old, shriveled woman. Skin stretched tight across bones, cheeks sharp, teeth bared, pelvis and ribs angular beneath copper-colored, paper-thin hide, the body’s sparse silvery hair fell from the scalp, and the stink of decay filled the room.

Maria stumbled back in shock. With a shriek, she turned and fled the apartment, barely able to close the door behind her.

When Paul and Christina arrived home later that night, they noticed nothing unusual. Engrossed in the last twelve hours of their own experiences―politics at Paul’s work, and the new show Christina was opening in less than a week―they mixed their customary drinks and compared notes on their demanding workdays.

Looking up from her glass, Christina noticed the vacuum cleaner was still out, leaning in a corner of the living room. With a sniff and a resolution to give Maria a good talking-to, she replaced it in the utility closet, and went back to her husband. As she passed through the dining area, she saw the silverware had been polished, but not put away; forks, knives, and spoons lay scattered across the glass dining room table, gleaming dully under the dimmed chandelier. Christina replaced the tableware in its case, her lips pursed, adding this infraction to her mental list of reprimands for Maria. This maid had been with them for years, but lately she’d lost some of her attention to detail. Leaving lights on when she left the apartment, forgetting to unload clean clothes from the dryer, leaving the television volume turned up when she shut it off… This laxness was starting to wear on Christina’s patience.

Returning to the living room, she took the second drink her husband held out to her, and sipped. As the martini burned in her throat, she scented something―rank, bitter, sickly sweet, almost unnoticeable, but not entirely.

“This is the last straw,” Christina said indignantly, swallowing hard and shaking her head as Paul noticed the smell, too. “We simply have to find some more reliable domestic help.”

Cocktails in hand, husband and wife sniffed their way through their home, checking under cupboards and behind furniture for the source of the smell. Both agreed that Maria had probably brought some dead animal with her from her run-down neighborhood… perhaps she’d left it for them out of spite. They hadn’t raised her hourly wage in some time, and lately she’d been more sullen than usual. It was only out of charity, they’d kept her this long. She needed them more than they needed her. But still, her attitude had deteriorated in the past months. With mounting indignation, they made their way slowly around the apartment, until they stood in front of their bedroom.

With measured pace, Paul walked the perimeter of the room, checking under the chest of drawers and behind the dressing screen for the source of the smell. He set his drink on Christina’s vanity table and poked his head underneath; perhaps some food had fallen behind there and had taken weeks, even months, to go bad.

Hands on hips, Christina surveyed the room, nostrils flared. Everything appeared to be in place―except the laundry, which lay in a heap in the middle of the floor. The smell couldn’t be coming from there, she thought. Their dirty clothes usually smelled better than Maria’s clean ones. She could see nothing. But this room was the obvious source of the odor. Scanning the room, sipping her martini, her gaze eventually rested on the bed―a tangled mess of sheets and blankets. Incensed, she strode towards it and pulled hard at the covers.

Christina screamed. In his haste to get up, Paul smashed his head against the underside of the vanity, and stumbled woozily to his wife’s side. She stood ashen and shaking beside the bed, her quivering hand clutching the edge of the sheet. When he reached her side, Paul recoiled, his stomach churning.

It was a horrible sight―the corpse of an old, old woman, hair white and sparse, falling from a bony skull, skin pulled tight back from a skeletal face, grey teeth grimacing between shriveled lips in the light from the city outside. Flat remnants of breasts lay on a sharply bony ribcage, and the abdomen was sunken between pelvic bones stabbing upwards through the parchment-like flesh. An unholy stench rose from the body, leathery and emaciated, rotting and covered with a fine, grey dust.

“Oh, God―” Paul choked back a wave of nausea. Christina stood motionless, frozen with terror. “When we get hold of that maid―” he muttered, prying the covers from his wife’s hand, gingerly pulling the blankets over the body.

Beside him, his wife swooned, her hand clamped over her mouth. She reached for his arm and steadied herself, then staggered to the bathroom. She barely made it to the toilet in time. The martinis and late lunch she’d gobbled in a rush that afternoon spewed into the toilet bowl, as she heaved and heaved till there was nothing left in her stomach.

What horrible thing had they done to Maria? Christina wondered, her gut churning and her head pounding. What could they possibly have done to deserve this?
Paul’s stomach heaved suddenly, and he staggered to the kitchen where he vomited violently into the sink.

If this was Maria’s idea of a joke, he thought angrily, she could find work elsewhere. Was this some kind of snake-handler’s vendetta? A voodoo trick, maybe? He thought back over the past months. What had possessed Maria to do this to them? Was it the pay? Had one of his competitors at work paid her to do this? He knew he had enemies―they both did―but what monster could have put her up to such a thing?

“Honestly,” Christina snorted. She threw open the door, stalked through the dressing area, and burst into the master suite. Paul followed, muttering about the “unwashed masses.”